One of the good things about having a long running blog is that you rediscover stuff you wrote and can update it.

Back, um, “some time ago” (six years now crap I’m old), I dealt with the question of whether peer reviewers are overburdened. That is, there are too many papers and not enough people willing to review them all. At the time, I was suspect of the claims that being asked to review one to three papers a month was normal.

This question came up again on Twitter today. Since it’s been a few years, I wondered if I was still a pariah. I got the impression I was being asked to review more now... 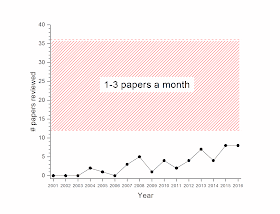 And I am. The trendline is definitely upward. But it’s still far less than the “one to three papers a month” figure that people were claiming. I might hit the “one per month” around 2022.

I was part of the reviewer “talent pool” in the early 2000s, but got very few invites. I am the same guy now as then, so what’s changed? I think I’m getting asked to do more reviews because of the time spent in the academic system. And I was, luckily, able to step up my own publication game around 2010, which may have contributed to my “name visibility” among editorial boards.

I know some people on Twitter who are on journal editorial boards, and they do indeed complain about finding reviewers. But I wonder how well editors use the available talent pool. I would bet that journal peer review invitations are biased against:

Update, 5 December 2016: This tweeted list of “Top reviewers” from the journal Neurospsychopharmacology has nine men and one woman. Hat tip to Bita Maghaddam.

Update, 23 March 2017: Big new study in eLife by Helmer and coleagues (2017) supports that the hypothesis that “women are underrepresented in the peer-review process.” This comes on the heels of a Nature article that also supports this hypothesis.

Updated, 10 September 2017: Matt Hodgkinson tweets that for geology journals, women are underrepresented as suggested reviewers, and decline more often than men. But it is getting better.