Sometimes, you get to watch a friend win one. And that win is practically as sweet as one of your own.

Friend of the blog Dr. Becca has been getting a rough ride at tenure time. Until today: 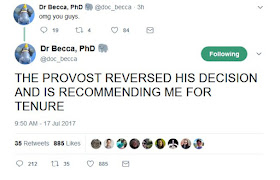 THE PROVOST REVERSED HIS DECISION AND IS RECOMMENDING ME FOR TENURE


First things first: Congratulations, Becca! I am so happy for you! Wooo!

Other things: Becca’s win is important beyond just the obvious significance for her and her students and collaborators. It needs to be seen and discussed widely for two reasons.

First, her case needs to be talked about because the grief she was getting was all about one thing: money. Scratch that: it was because she didn’t get the right kind of money. Her job was being threatened because she hadn’t brought in a stand alone research grant from the National Institutes of Health (an NIH R01, to use the jargon). 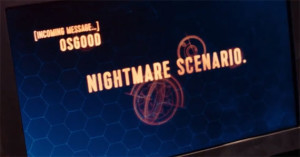 Becca’s situation is the nightmare scenario that many early career scientists are staring down. The NIH budget is flat, applications are up, and most recognize that the success rate in applying for NIH grants is now so low that many perfectly good projects go unfunded.

In other words, getting a grant has a healthy dose of luck to it and no amount of granting savvy can ensure you will pull down any particular grant. Lack of a grant does not mean your colleagues don’t think you’re doing crummy science.

Becca’s situation shows how dire and destructive this habit of “outsourcing” tenure decisions to granting agencies has become. Professors and administrators need to talk about this and adjust their expectations to line up with reality, and not expect the stone to give blood if you “incentivize” the stone enough.

This is something that has been buzzing in the background for a long time, but the situation has worsened in the last 6-7 years. Academics are used to stability at much longer time scales and aren’t prepare to adjust to the ground shifting underfoot in the time it takes to hire a professor to her tenure review.


Becca shows that you can fight the dragons of university administration, and you can win. And a lot of early career academics need to know that. Because dragons are big and scary and it is easy to give up and concede the battle.

Becca was confronted with career dragons.