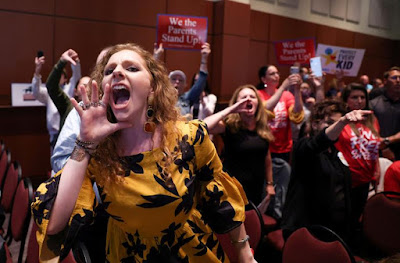 In the last few months, “critical race theory” has gone from an academic idea mostly (but not exclusively) taught in law school to a flashpoint item that American right wingers are willing to go to the mattresses over.

There have been ample shouting in school board meetings.

Critical race theory is not my area of expertise (please forgive me, social science and humanities scholars, for musing here), but watching this feels very much like something I am familiar with and have watched closely for a long time: the fight over teaching evolution.

I noted on Twitter that a lot of the same forces that traditionally mobilize against the teaching of evolution are now mobilizing against the teaching of critical race theory. Laws are successfully getting passed in state legislatures. And while one side is willing to show up in large numbers and shout at school boards, the other... has not been so active.

There’s a lot of reasons for the lopsided reaction, bit I can’t help but wonder if people who are not freaking out over critical race theory are not bringing the same fire to the fight is because they look at the laws that are being passed, think, “That’s going to court and the laws will get overturned.”

A few things make this sound plausible on the face of it.

But more to my point here, this is what happened with the teaching of evolution. There was often widespread political and public support for laws that tried to regulate the reaching of evolution. But time and again in the US, the courts have said, “No, those anti-evolution laws are unconstitutional.”

I do not feel extremely confident that an American court case would strike down the laws prohibiting critical race theory.

While regulating or banning the teaching of evolution and banning the teaching of critical race theory are both pet projects of the political right in the US, the arguments over evolution are inextricably intertwined with religious beliefs. A government promoting particular religions (mainly fundamentalist Protestant Christianity) runs afoul of the establishment clause of the first amendment of the US constitution. That has been a key legal aspect of all the cases.

The opposition to critical race theory is not as clearly driven by religion, which makes the legal issues very different. Even if the end result – states dictating what can and cannot be taught – looks very much the same.

This is why academics of any stripe, including my fellow scientists, need to be paying very close attention to how these fights over critical race theory play out.

University instructors have mostly taken it for granted that they can teach subjects as they see fit. The fights over critical race theory are a test case.Climate science is another area that many on the right would probably love to dictate how it is taught. Ditto anything around sexual and gender diversity.

If those laws are not smacked down fast and hard, whether in the courts or by political and public action, this could be the start of a sustained squeeze on how universities teach in the US. And America’s reputation for its universities in the world will suffer.