The currency of science is currency

I used to tell students, “Your publications are gold. Peer reviewed journal articles are the currency of science.”

I don’t think I’m going to tell them that any more.

Kat Milligan-Myhre brought this blog post to my attention, bemoaning that administration at University of Wisconsin sees money as an end, not a means to an end. This aligns somewhat with my own experience in the US. I want to talk a little about we got to this point. 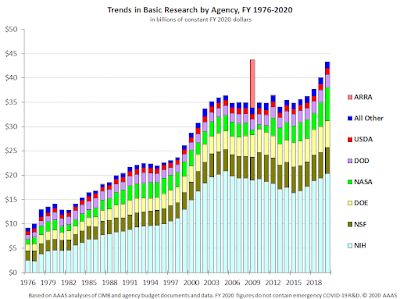 First, in the US, the National Institutes of Health (NIH) doubled their budget throughout much of the 1990s. Universities responded to that incentive and built infrastructure and hired faculty in biomedicine. But that budget doubling stopped in the 2000s. When you account for inflation, the budget shrank over the next few years. Universities had invested so deeply that they couldn’t back out, and were determined to get that money.

In my experience, many university administrators were not truly aware that the budget had stopped increasing and did not realize how competitive grants had become. They had spend the better part of a decade hearing how big the NIH budgets were and couldn’t face the new reality.

You may object that this is only biomedicine and only in the US. True. But the NIH had the biggest basic research budget, and trends in the US tend to get reflected elsewhere.

Plus, something else happened in the 2000s. Academic publishing embraced the Internet and stopped relying on paper copies.

I point, as I often do, to the debut of PLOS ONE in 2006 as a significant turning point in academic publishing. It only reviewed for “technical soundness,” not “quality.” Because of that, people complained that “they will publish anything” (even when this was clearly not so). Nevertheless, it certainly expanded the range of papers that were publishable.

It not only published more papers, but other publishers copied the model. The number of peer-reviewed journals expanded significantly.

And we also got journals that only pretended to be peer-reviewed adding confusion to the mix.

People evaluating faculty had often counted the number of publications because it is simple and does not require deep knowledge of the content of the papers. But as a whole swathe of new journals arrived, I am willing to bet that more and more faculty were able to push out papers somewhere.

From the point of view of someone attempting to evaluate faculty (because “excellence” and everything), this meant that publication number was not informative because there was less variation, and because administrators often aren’t active researchers themselves, they worried about noise and whether they could trust whether the journals were “real” journals.

But the grant process was still exclusive, and – importantly – still run by scientists. Grants still had the imprimatur of peer review.

Even if you put aside the desire for money, I could see how an administrator might prefer to switch from a simple metric that has lost much of its signal and is potentially corrupted (number of publications) to a different simple metric that is more exclusive and is still perceived as having integrity (number of grant dollars).

At this point, maybe we should update our vocabulary. Instead of “professor” or “researcher,” we should call people “research fundraisers.”

From now on, I’ll probably be advising students to look for competitive opportunities like scholarships and society grants as much as I advise them to publish.