The rise of TikTok in misinformation

Ben Collins’s Twitter thread about how misinformation about medication to get worms out of horses has become the cause du jour for many.

Can’t stress how wild the ivermectin Facebook groups have become. So many people insisting to each other to never go to an ER, in part because they might not get ivermectin, but sometimes because they fear nurses are killing them on purpose “for the insurance money.” ... It’s just a constant stream of DIY vitamin therapies and new, seemingly random antiviral drugs every day — but not the vaccine.

This is distressing, but I wanted to home in on this comment in the thread.

The ivermectin Facebook groups also offer a window into how pervasive antivaxx COVID “treatment” videos are on TikTok.

The groups serve as a de facto aggregator for antivaxx TikTok, a space that is enormous but inherently unquantifiable to researchers.

When I last wrote about the dangers of recommendation algorithms (in pre-pandemic 2019), I focused on YouTube. TikTok existed then (it started in 2016), but it wasn’t included in Pew Research’s list of social media platforms until this year. 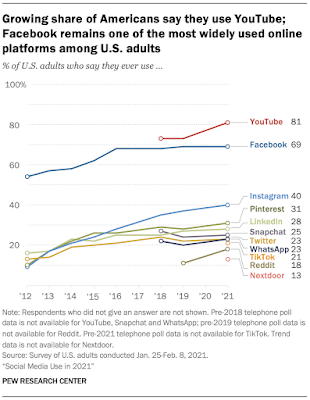 Even today, TikTok isn’t even used by one in four Americans. It’s more like one in five. It’s impressive that it’s pulled close to Twitter, which has been around far longer. And also frightening that it is having this outsized effect that is leading people to try... anything

Everything is a miracle cure, or it isn't, but every drug is worth a shot. Except, of course, the thing that works: the vaccine. Anything pro-vaccine is instantly written off as “propaganda.”

There are lots of issues raised here that I can’t process all at once. But I think Collins’s comment that TikTok is unmeasurable for researchers strikes me at something important. Could the requirement for more data transparency in how TikTok selects what videos to show someone help? Not sure.

But we may be at the start of an arms race between social media platforms using data to show things to viewers, and researchers trying to “break the code” to figure out just what the heck people are actually seeing.

Recommendation algorithms are the biggest problem in science communication today